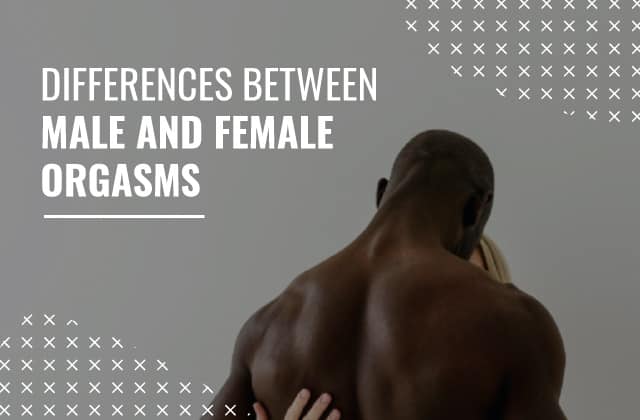 Contrary to what most of us believe, male and female bodies are actually very similar in most respects. However, when it comes to sex, many differences spring to mind. In this article, we’re going to explore one of the most important ones: the differences between male and female orgasms.

It is common knowledge that both men and women can feel pleasure, regardless of their genitalia. However, the physical differences in our bodies mean that we experience it differently, especially when it comes to orgasms. Before we delve into these differences, though, we need to be able to separate the biological aspects from the social ones.

For example, some studies suggest that men reach orgasm more often during sex (95%, compared to 65% for women). However, this is not due to the different biological characteristics of male and female bodies, but rather to cultural factors (inexperience, lack of communication, the role of intercourse during sex, etc.). In this article, we’re going to focus on the biological differences, so keep reading!

It has been shown that the duration of orgasms is different in women than in men. Men tend to have shorter orgasms, between 3 and 10 seconds, while women can have orgasms that last up to 20 seconds.

Measuring orgasm intensity is not easy, but one way of doing it is by calculating the pelvic contractions that occur when women climax. In this case, women have also been found to have more intense orgasms, as, on average, they experience more and faster contractions than men.

We have already mentioned that men tend to experience orgasms more often than women. However, if we consider one single act of sexual intercourse, women can have more orgasms in that period of time. This is due to the so-called “refractory period”, which is the time during which no arousal occurs after climaxing.

The refractory period in women is very short or almost non-existent, allowing them to have several orgasms in a short period of time, even several in a row (multi-orgasmic women). Men, however, have a longer refractory period, needing time to recover before they can experience orgasm again – this is usually several minutes, or even hours.

Women and men, generally speaking, are aroused in somewhat different ways. Men are usually aroused more quickly simply by imagining sex, and will be ready for intercourse in a matter of seconds. Women, on the other hand, tend to take a little longer and also need other types of stimulation, such as caressing or kissing.

Men tend to be more visual, and sexual images are more arousing to them, whereas women are more likely to explore sexual pleasure with other senses. Because of this, there are other more efficient ways to arouse them, with touching possibly being the most effective.

Men and women can experience different types of orgasm. For men, there are two more commonly known ones: through stimulation of the penis, and by stimulating the G spot through the anus.

For women, the best-known one is the clitoral orgasm, through stimulation of that little magic area called the clitoris. But many women also experience vaginal orgasms through penetration, as well as orgasms by stimulating the female G spot inside the vagina.

As mentioned above, most male orgasms are accompanied by ejaculation containing semen. Occasionally, however, they may have what we call “dry orgasms” which bring pleasure, but no ejaculation.

For women, the opposite is true: most female orgasms are accompanied by vaginal lubrication but no ejaculation. However, female ejaculation can occur in some women with proper stimulation – it isn’t a myth.

This is one of the most striking differences between male and female orgasms. While the male orgasm has a clear reproductive function (since it almost always involves ejaculation that carries sperm), in the case of women this isn’t the case, and the orgasm is merely pleasurable. And, obviously, for pregnancy to occur, a man has had to have an orgasm at some point, whereas a woman doesn’t.

From a reproductory point of view, this makes sense, as the male will seek pleasure as often as possible, thus increasing the likelihood of having offspring. But how can we explain this in the case of females? This is not as clear, although some studies suggest that after an orgasm, the female is more likely to lie down to “recover”, which would help the sperm to reach the ovaries, thus assisting in pregnancy.

So, we have seen that men’s and women’s orgasms are very different, but there is one last thing we need to talk about: pleasure. Each person will experience pleasure differently, and this cannot be evaluated in scientific studies. Because of this, we can’t really compare male and female orgasms in this respect, just as we can’t compare orgasms between two different women or two different men.

What we can say is that both sexes have a similar response: their breathing and heartbeat accelerate, their blood capillaries dilate (we blush), and they experience spasms in their bodies.

In other words, both sexes experience enormous pleasure during the climax, which, when it comes down to it, is the most important thing.

We hope this article has helped you to understand the differences and similarities that men and women experience during sex. We also hope that your sex lives will be full of understanding and, above all, pleasure.