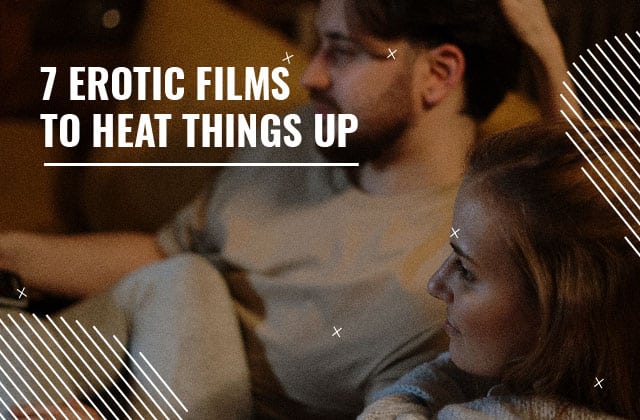 I’m sure that, on many an occasion, you’ve wanted to sit down and enjoy a film, but when faced with the massive selection we have these days, time seemed to disappear and you couldn’t decide which film to watch.

This is our special selection of 7 essential films that not everyone knows about – we’re sure you’ll enjoy them!

It was called a pornographic film at the time. The film reflects a true story from Japan, set in the years before World War II, all about the unhealthy relationship between a geisha and her boss.

The atmosphere in the film is highly charged, and leaves you breathless. Empire of the Senses is a film that you just have to see, and with its explicit sex scenes we’re sure it’ll raise the temperatures.

A young newly-married woman travels to Bangkok where her husband lives. There, she’ll discover and explore her sexuality in ways she had never bargained for.

This French film wasn’t free from controversy because of the way it dealt with the sex scenes – don’t forget that it was made in 1974 – but that’s what has made it one of the most famous films in history.

In the late 1990s and early 2000s, this Basque film director Julio Medem rose to fame with films such as Cows, Lovers of the Arctic Circle, and the one we’re talking about here, Sex and Lucia, a film which established him as one of the most important Spanish screenwriters of his time.

Lucía y el Sexo focuses on Lucía, a waitress who travels to Formentera looking for a new start in life after the disappearance of her boyfriend, Lorenzo. However, while there, she’s destined to have to confront her relationship and her past.

This Canadian film, directed by Clément Virgo, tells the story of Leila and David and their love life – a couple with a very different way of seeing life and understanding relationships.

In 9 songs, Matt and Elisa live out a love story that sex plays a very important part in. Winterbottom uses emotive music as the backbone of this acclaimed film.

Another very interesting point is that the sex scenes in this film are real, and this might really help to light the fuse for a night of passion!

This is one of the first films directed by Oscar-winning Alfonso Cuarón. It also introduced two young Mexicans who would become real stars as a result: Gael García Bernal and Diego Luna. Their fellow cast member is Maribel Verdú, an object of desire for thousands of Spaniards and people around the world.

In And your Mom, too, these teenagers, Tenoch and Julio, are at a party and meet a woman who has just discovered her husband’s unfaithfulness. The youngsters invite her out for a trip to the beach and she accepts.

It’s a generational film that marks the passage from adolescence to adulthood, with tremendous chemistry from the leading trio. You can sense the sexual tension throughout the whole film.

Dane Lars von Trier is one of the most controversial film directors on the scene today. Used to exploring and investigating different genres, in this film he delves into the sex life of a nymphomaniac woman, played by Charlotte Gainsbourg.

In Nymphomaniac, Von Trier, never afraid of courting controversy, includes explicit scenes of both simulated and real sex and invites us to reflect on our conception of sexuality and ask ourselves what is normal and what is beyond limits.